The Facts On Inflammatory Bowel Disease And The Gut Microbiome

Here's what you need to know about inflammatory bowel diseases, Crohn's and ulcerative colitis, and what gut microbes have to do with remission and flares.

Crohn Disease (CD) and Ulcerative Colitis (UC) belong to the Inflammatory Bowel Disease family (IBD). They affect different parts of the digestive tract, but are both characterised by prolonged and chronic inflammation that can cause permanent damage.

These conditions were first recognised in Western countries during the Industrial Revolution, and IBD has become increasingly common in these countries since then.

In recent years, it has been on the rise in developing countries, Asia in particular, where urbanisation is moving swiftly and following a Western lifestyle is becoming increasingly popular.

☝️DISCLAIMER☝️ Always consult your doctor if you experience chronic or prolonged digestive distress.

A genetic predisposition combined with environmental factors are thought to be at the core of these diseases. So far, researchers suggest that negative alterations in the gut microbiome, abnormal immune system reactions and infections may explain why some people with a genetic predisposition develop an inflammatory bowel disease, and others don't. 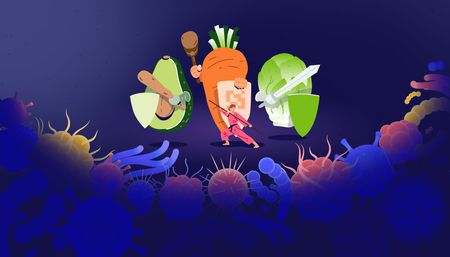 How do gut bacteria protect your health?


What are the symptoms of a flare?

A flare is characterised by inflammation that damages the lining of the digestive tract. It causes lesions that can turn into open sores that heal leaving scar tissue.

The most common Crohn's disease symptoms and symptoms of ulcerative colitis are the same. Always consult a doctor if you are worried about your digestive health, especially if you experience chronic pain, weight loss and/or bleeding.

Factors that can trigger flares include missing IBD medication, taking non-steroidal anti-inflammatory drugs (NSAIDS like aspirin and ibuprofen), antibiotics, stressful events and certain types of food. Smoking is a trigger for Crohn’s, but not for ulcerative colitis.

Is there a cure for inflammatory bowel disease?

There is no cure for IBD, patients cycle between flares of damaging inflammation and remission, which are periods of little or no problems. However there are medications to manage the symptoms. Achieving long-term remission by identifying and avoiding triggers in combination with medication is the goal of doctors.

☝️TIP☝️ Atlas Biomed Tests assess the impact of your gut microbes and genes on ulcerative colitis and Crohn’s disease.

The gut microbiome in Crohn's Disease

Crohn's disease may affect any part of the digestive system. It causes damage in patches of the gut lining, leading to malabsorption of nutrients from food. The small intestine is most commonly affected and lesions can penetrate every layer of the gut lining.

Studies show that patients with Crohn's suffer from dysbiosis. That means there are measurable negative alterations in the composition of their gut microbes. People with Crohn's tend to have lower levels of Faecalibacterium prausnitzii, beneficial bacteria that protect the gut from inflammation.

Researchers also found higher levels of bacteria in the mucous membrane of the gut lining and presence of bacteria known to make humans sick. For example, they detected increased levels of adhesion-invasive Escherichia coli that can stick to the gut lining causing inflammation.

If you're wondering how, read on. One study described these pathogenic E. coli as being able to alter the integrity of the gut lining, disturb the microbial balance in the gut ecosystem and cause inflammation by modifying the activity of specific genes. That's both impressive and depressing at the same time.

More and more researchers have been investigating the role of the gut microbiome in Crohn's disease, hoping to identify trademark features that could speed up diagnosis, making it less invasive, and also provide treatment.

Authors of the 2017 study A microbial signature for Crohn's disease identified a specific pattern of dysbiosis that could help in the diagnosis of this disease. The biomarkers included "reduced diversity, a less stable microbial community and eight [specific] microbial groups".

Interestingly, it has also been shown that the gut of patients with inflammatory bowel disease may favour the presence of fungi over bacteria in the microbiome. According to a 2016 study, there was a “distinct fungal microbiota dysbiosis” and a “dramatically unbalanced network” between bacteria and fungi compared to the microbiome of healthy participants.

The gut microbiome in ulcerative colitis

Ulcerative colitis usually only affects the colon (AKA large intestine/bowel) and the rectum. Yep, that's the last straight stretch of your bowel that ends in the anus. The lesions only affect the innermost layer of the gut lining, called the mucosa, causing continuous damage (not in patches) that usually starts at the rectum and spreads into the colon.

Researchers in labs have successfully induced ulcerative colitis in animals by giving them dysbiosis. And while making animals sick is nothing to celebrate, these investigations revealed something important: specific negative changes in gut microbes could be the reason why some people get UC and others don't.

Obviously, this was a very exciting finding and so researchers got stuck into this area. Conducting studies on humans, they discovered that the gut microbiome of ulcerative colitis patients is about 25% less diverse than in healthy controls.

Interestingly, it seems like pathogenic bacteria known to cause infections like Escherichia coli, Clostridium difficile, Helicobacter and Salmonella (among others) are more likely to be found in the guts of UC patients. In fact, several studies have found possible associations between having these infections and increased risk of getting this disease.

Studies also indicate that lower levels of several beneficial types of bacteria may increase the risk of a flare in patients with ulcerative colitis. Trademark features of the UC microbiome include lower representation of bacteria like Akkermansia, Faecalibacterium, Eubacterium, Ruminococcus and Phascolarctobacterium.

Patients in these studies had lower levels Firmicutes bacteria F. prausnitzii and Roseburia hominis that produce butyrate, a short-chain fatty acid that fuels the cells of the gut lining, supports immune system function and plays an anti-inflammatory role. In fact, some research even indicates that F. prausnitzii levels may influence the length of remission without a flare in patients.

Other studies show that levels of probiotic Lactobacillus, a beneficial bacterium, vary between flares and remission in UC patients. One study, in particular, found that patients with an ulcerative colitis flare up had significantly lower levels of several Lactobacillus species.

The authors suggest that “these results imply that a reduction in intestinal Lactobacillus species may be important in the initiation of ulcerative colitis."

So there is still a lot to learn about these debilitating conditions but it is clear that gut microbes, past and present, play an important role and may be the source of ulcerative colitis treatments in the future.


Can I test my gut microbes for IBD?

If you've taken the Atlas Biomed Microbiome Test, you can click on the links below to access your results for Crohn's, ulcerative colitis and relevant features like gut microbial diversity. If you would like to know more about our technology, keep reading.

Microbiome testing like we do at Atlas Biomed is the same researchers use to conduct studies like you've been reading about. Our test results include summaries of all the bacteria identified in your sample and how they correlate with health and disease protection.

We’ve designed food recommendations that are totally personalised to your results. The aim is to help increase diversity and abundance of beneficial species that are involved in maintaining a stable and healthy microbiome environment.

We also recently added a new Probiotic and Beneficial Bacteria report and tailored recommendations for food and probiotic supplements that can enhance your gut microbiome.