The Facts On Barrett's Esophagus Symptoms And Barrett’s Disease

Chronic acid reflux, if untreated, can profoundly affect your esophagus, causing the cells to change. It’s called Barrett’s esophagus, and it increases the risk of cancer too.

Barret’s esophagus is a condition associated with gastroesophageal reflux disease (GERD), a form of chronic acid reflux. Recurrent exposure to gastric juices can induce changes in the cells that line the esophagus, which increases the risk of cancer.

However, its name is inherently complex due to how it is spelled: esophagus starts with oe- in traditional spelling (stemming from Greek) or e- in the simplified and modern version. It really doesn’t help that Norman Barrett spells his name with two tts also.

If you are searching for information using any of these terms, then stay awhile and read. We’ll get you up to speed on the science-based consensus about Barrett’s esophagus, its symptoms, the cancer risk, and how it’s treated.

What is Barrett's oesophagus?

There’s a tube that connects your mouth to your stomach, and it’s called the esophagus. It is cleverly designed because it also comes with a tight valve at the bottom which stops stomach acid from being regurgitated and causing acid reflux.

Sadly, for a growing number of people, this mechanism isn’t working properly, and chronic acid reflux is on the rise in Europe and America. In fact, if you suffer from 2+ episodes of acid reflux per week, it is a diagnosable condition called *gastroesophageal reflux disease* (GERD).
1–2%
Prevalence of Barrett’s esophagus in European populations

When the delicate lining of your esophagus is recurrently exposed to the potent gastric juices of your stomach, it can cause the cells to change. As a result, cells like those of your intestinal lining grow in their place, and this increases the risk of developing a malignant cancer called esophageal adenocarcinoma.

When a disease or condition is recognised by the medical community, stalwart teams of researchers set about investigating every aspect of it. In particular, they’re interested in what factors can influence a person’s probability of developing the condition.

The main underlying feature of Barrett’s esophagus is chronic acid reflux (heartburn) that is not controlled by medication. The most common and reliable treatment for chronic reflux are Proton Pump Inhibitors, a type of medication that suppresses the production of gastric acid. There are also several known risks and possible factors for Barrett’s esophagus:


These risk factors are not a guarantee that you will develop the disease. Rather, they mean that Barrett’s esophagus is more likely to occur in people who have one or several of these risk factors.

☝️TIP☝️Just because you don’t have these risk factors doesn’t mean you are immune to Barrett’s esophagus, especially if you have chronic untreated gastric reflux.

The symptoms of Barrett's oesophagus are few, and they’re very much related to the symptoms and problems that come with frequent heartburn. That’s because gastric juices are very acidic – only the stomach lining is designed to handle them. So when these juices interact with your esophagus, they cause inflammation and pain. 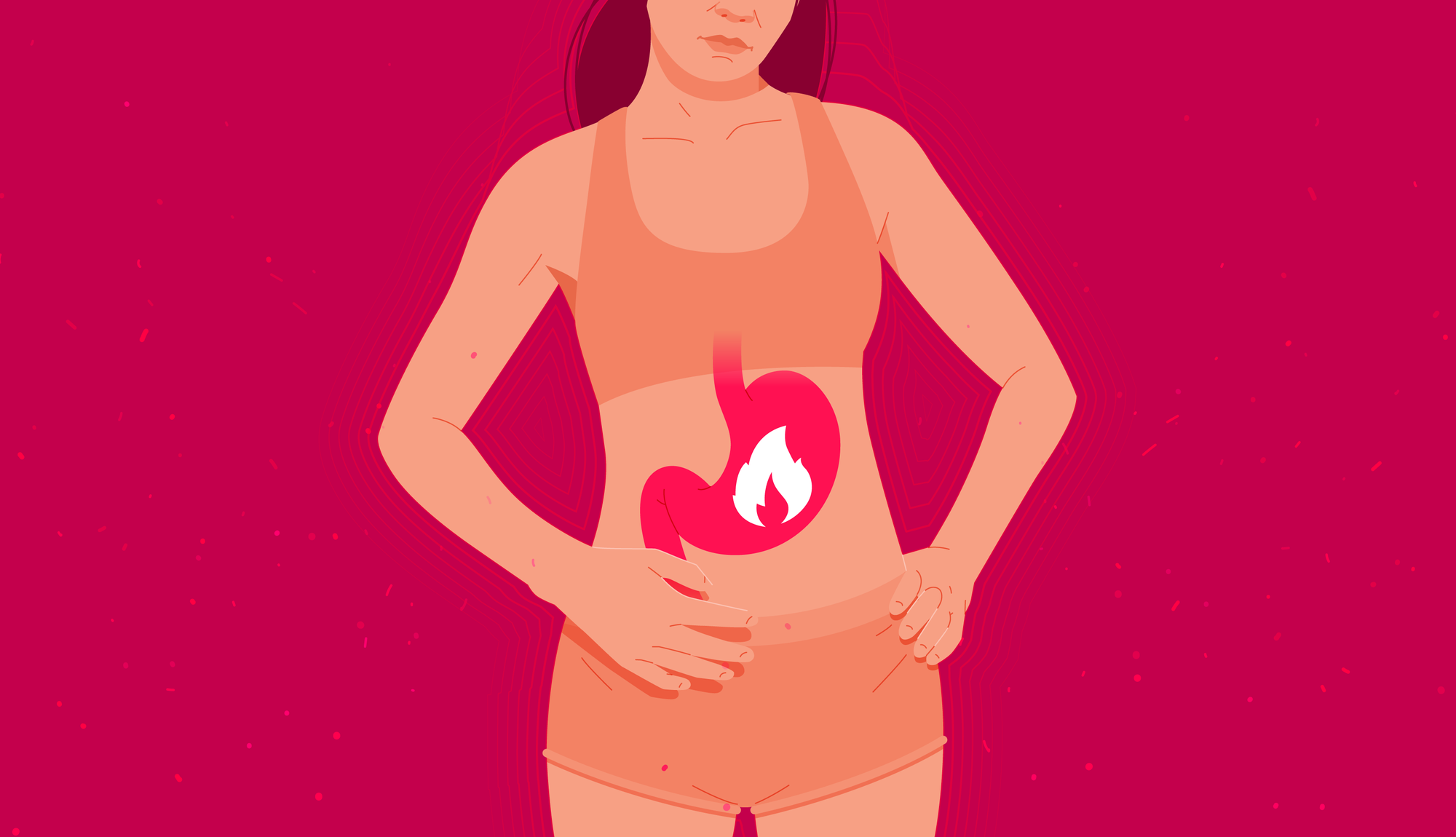 The facts on acid reflux

The signs of this condition are mainly diagnosed by endoscopy, a procedure during which a scope is introduced into your esophagus to look for visible changes and take samples of the tissue. If you notice the following Barrett's disease symptoms, contact your doctor:

Many people think that there’s a link between Barrett oesophagus and back pain, but that’s not recognised by the diagnostic guidelines used by medical professionals. However, Barrett's esophagus cancer symptoms to look out for are weight loss, vomiting, choking, and coughing.

This condition is considered to be “premalignant”. That means that, yes, it’s serious. Because it increases the risk of esophageal adenocarcinoma. Without treatment, the cells of your esophageal lining may continue to change in a pathological way that could result in esophageal cancer.

In order to assess the nature and progression of changes in your esophageal lining, doctors need to perform an endoscopy to evaluate how much tissue is affected and take samples. These samples are sent to the lab where the cells are analysed to see if they are malignant.

Barrett’s esophagus and the gut microbiome

Some research even highlights early associations between Barrett’s esophagus and the esophageal microbiome. That’s right, microbes even live in your food pipe, and usually that’s fine. However, specific changes in the composition of bacteria living in the esophagus suggests that chronic exposure to gastric juices may not only cause changes in your cells, but in your esophageal bacteria too.

Interestingly, Helicobacter pylori – a microbe now considered to cause gastric infections that can lead to gastric ulcers and gastric cancer – may exert a protective effect against Barrett’s esophagus and esophageal adenocarcinoma. However, there is still much to be learned about H. pylori, and its influence on health is still a topic of debate.

Conversely, while PPI medication can prevent acid reflux and reduce damage to the esophagus, it also disturbs the microbiome composition of the stomach, small intestine, and the colon. That’s because stomach acid is a barrier against bacteria, preventing pathogens from colonising the lower organs of the digestive tract.

If you are taking PPIs to manage heartburn, the effects may be felt in your gut microbiome. By taking a microbiome test, you can get a full health profile of your gut’s bacteria and personalised food recommendations to bring balance to this ecosystem.

The good news is that correct management of acid reflux with medication and diet can help prevent further progression of tissue degeneration. Your body is also a beautiful biological orchestra of events that has the ability to combat inflammation and heal wounds.

With the right plan and careful monitoring, patients can actually help these natural processes, especially by targeting lifestyle factors that are associated with chronic reflux. These should never be undertaken alone. If you have Barrett’s esophagus, it’s important to follow the doctor’s care plan. However, there are simple changes you can make to support it:

Some foods and eating styles are known to trigger acid reflux. These include greasy food, coffee, alcohol, fizzy drinks, tomatoes, chocolate, and citrus fruit. It’s also important to monitor the size and quality of your meals.

Eating large plates of food can fill up your stomach and put pressure on the valve of your stomach that prevents acid from going back up into the esophagus. Fizzy beverages can also cause gas to accumulate in your belly that will force open the valve so you can belch.

Greasy foods and meat are harder to digest so they stay in the stomach longer, which isn’t great – especially if you just ate a big meal. Instead, opt for plant foods like vegetables and fruit that are easier to digest and actually encourage food to move from your stomach down into your small intestine.

2. Gentle exercise is your friend

Mild exercise after a meal helps food travel down the digestive tract, relieving pressure on your stomach. Now it makes sense why the British enjoy a nice leisurely stroll after Christmas dinner. At the same time, regular exercise (not just after meals) can help you lose weight, improve digestive function, and support heart health.

☝️TIP☝️Avoid strenuous exercise after a meal or if you have untreated heartburn because it puts pressure on your diaphragm that can cause acid reflux.

3. Cut down on the bad habits

Alcohol and tobacco are notorious for triggering heartburn. By reducing your intake of these substances, you can give your esophagus a break. Smoking has been pinpointed as a risk factor for Barrett’s esophagus, but it’s also linked to many other serious health problems… There’s no time like the present to give up smoking!

Curves are beautiful, we agree. But when the curve is on your abdomen, it’s a sign that your body has accumulated fat stores in a place that puts pressure on your diaphragm and your stomach. This pressure exerts force on your valve that can push the contents back up into your esophagus.

Adopting a diet rich in whole, plant-based foods and getting regular exercise won’t just help relieve heartburn, it can also help you achieve a healthy body weight so your diaphragm and stomach aren’t under so much pressure. It also helps reduce chronic low-grade inflammation so your body can reignite its natural healing processes.

Can Barrett's oesophagus get better?

Barrett’s esophagus can be diagnosed and it can be treated, but there are different stages of progression. Depending on how damaged your esophageal cells are, the medical interventions may be more or less radical.

In the early stages, your doctor will seek to get your acid reflux under control with medication and positive lifestyle changes. In later stages, there are other more invasive methods that include removing the cells (resection) or burning them away (ablation or cryotherapy) by endoscopy or surgery.

☝️TIP☝️Diagnosis and monitoring are essential for gastroesophageal reflux disease and Barrett’s esophagus, because untreated, they increase the risk of cancer.