Faecalibacterium prausnitzii is a beneficial microbe that resides in the human colon. This butyrate-producing bacterium has anti-inflammatory properties that promote gut health.

The human gut is home to trillions of bacterial cells, collectively known as the microbiome or microbiota. Faecalibacterium prausnitzii is a common resident that scientists have pegged as a candidate for next-generation probiotics.

What is Faecalibacterium prausnitzii?

Faecalibacterium prausnitzii (also known as F. prausnitzii) constitutes 5–15% of the human gut microbiome, making this microbe an important contributor to balance and digestive health. It is a species of bacteria that belongs to the Firmicutes phylum – a classification of bacteria.

F. prausnitzii is currently the only known species of the Faecalibacterium genus. Even though microbiome analyses have revealed that these bacteria are very common, scientists still have limited information about them.

When analysing bacteria, researchers prefer to grow microbes to evaluate their functions. Unfortunately, Faecalibacterium prausnitzii is a strictly anaerobic microorganism, meaning it can’t survive exposure to oxygen, which complicates the research process.

16S rRNA sequencing used for microbiome testing, including the Atlas Microbiome Test, has made it possible to analyse the composition of the microbiota, including the abundance of F. prausnitzii. Another technique, known as shotgun sequencing, helps identify the genetic make-up of gut bacteria and identify what functions they perform. 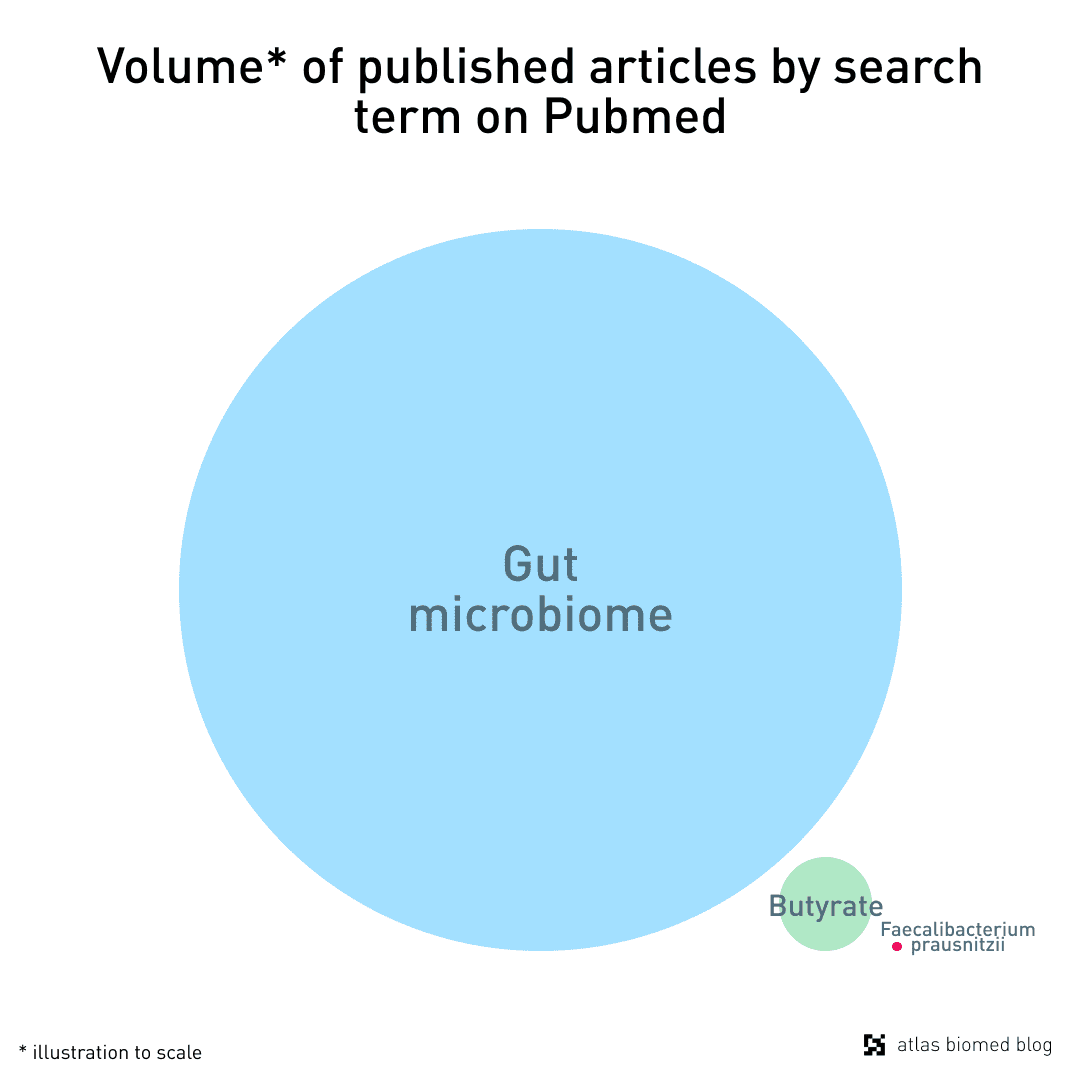 Recent studies have revealed that there is, in fact, great diversity of genetic profiles and functions between microbes that are classified as Faecalibacterium prausnitzii. It is likely that, in coming years, several species and strains related to F. prausnitzii will emerge and refine our knowledge of this microorganism.

Faecalibacterium prausnitzii produces butyrate, an essential short-chain fatty acid that supports a healthy intestinal environment. In addition, this microbe has several other anti-inflammatory and metabolic functions that make it an important participant in human health.

70% of the body’s immune tissues are located in the intestines. Known as gut-associated lymphoid tissue (GALT), this tissue provides essential protection against pathogens and damage inside the body, which can result in inflammation.

A balanced gut microbiome contains bacteria, like Faecalibacterium prausnitzii, that have learned to work in tandem with the immune system to prevent inflammation and protect against opportunistic bacteria that can cause infections.

Butyrate maintains the integrity of the gut lining, which prevents pathogens from entering the body via the gut. It stimulates the growth of villi (microscopic extrusions on the gut barrier) and encourages the production of mucin, a protective gel that coats the gut lining.

These microbes can produce shikimic, an acid commonly found in plants that is able to protect against inflammation induced by lipo- polysaccharides (LPS). LPS are toxins on the external membrane of some bacteria that can activate the immune system and cause inflammation.

The abundance of F. prausnitzii in a person’s microbiome is influenced by their health status and colonic environment. This is particularly relevant because below-average levels of F. prausnitzii have been found in patients with digestive diseases.

Research indicates that a healthy gut pH (5.7–6.7) provides optimal conditions for F. prausnitzii growth, while a highly acidic environment suppresses the growth of Faecalibacterium prausnitzii. In particular, people with ulcerative colitis and Crohn’s disease tend to have acidic stools, which may help explain why their microbiomes lack F. prausnitzii.

The presence of slightly elevated levels of bile and its components can also affect F. prausnitzii abundance. Bile is a substance secreted by the liver to break down fats during digestion. Bile salts have been shown to inhibit Faecalibacterium prausnitzii.

Researchers hypothesise that this sensitivity to bile could explain why these microbes are less abundant in patients with Crohn’s disease. People with this type of inflammatory disease tend to have higher levels of bilirubin, the pigment that gives bile its colour, especially if they have had part of their bowel removed.

The anti-inflammatory functions of butyrate include anti-cancer properties. This short-chain fatty acid is a histone deacetylase (HDAC) inhibitor: it suppresses the activity and life cycle of cancer cells. This has led researchers to investigate the role of Faecalibacterium prausnitzii in colorectal cancer.

Patients with colorectal cancer have less butyrate-producing bacteria, including Faecalibacterium prausnitzii. It has been suggested that, as a consequence of lower butyrate production, the cells of the gut lining may be more susceptible to damage, which could increase the risk of developing cancer.

Diabetes is a metabolic disease in which the body loses the ability to control blood sugar due to impaired insulin function. Elevated circulating glucose damages the blood vessels and increases the risk of heart disease.

A number of studies in humans have identified imbalances in the gut microbiome (dysbiosis), which weaken the gut lining and allow undesirable particles into the body that can disrupt other organs. Scientists believe that dysbiosis precedes and contributes to the development of diabetes.

Diabetes patients have lower levels of Firmicutes, including Faecalibacterium prausnitzii and other butyrate-producing bacteria that fortify the gut lining.

Studies show that lipopolysaccharides, pro-inflammatory molecules found on some gram-negative bacteria, can enter the bloodstream when the gut barrier is weak and impair B-cell function in the pancreas – the cells that produce insulin.

Do you have enough Faecalibacterium prausnitzii?

You can check the abundance of Faecalibacterium prausnitzii and see whether your gut bacteria makes enough butyrate with the Atlas Microbiome Test. Plus, you’ll receive tailored food recommendations to boost your microbiome and support gut health.