Kombucha Recipe For Dummies: Make It, Don't Buy It!

Here's a basic kombucha recipe for people who want a fermented beverage without the price tag, or the fuss.

Gone are the days of kombucha, drink of long-haired cultists clad in togas and sandals. You don’t need to join a sect to get your hands on this golden fizz anymore, because I’m going to teach you how to make kombucha. Real kombucha.

In fact, I can personally guarantee that the ingredients to start and sustain your kombucha for several months will cost you less than £20. That’s like 4 bottles of this delicious brew from the supermarket…
Get your hands in there and touch it. It doesn’t bite

How do I know this? For one, I have spent a lot of my hard-earned Atlas Biomed salary on kombucha and a culinary education with a focus on fermentation. And secondly, I also have approximately 10L of kombucha brewing on my kitchen counter.

Fermentation can seem daunting at first, but it’s not rocket science - it’s more like having a low-maintenance, ugly and slightly smelly pet that makes you beverages. Personally, I like to think of it as microscopic farming.

According to legend, kombucha started out in the Far East thousands of years ago. There was only one mother (SCOBY) that was shared and continued to reproduce until it made its way into your kitchen.

Kombucha is a fermented drink made from sweetened tea using a S-C-O-B-Y. For those who like acronyms, that means Symbiotic Culture Of Bacteria and Yeasts. If you’re wondering why the A isn’t capitalised, rest assured - so am I.

When most people talk about the SCOBY, they are referring to the trademark alien-like disk that forms on top of the kombucha liquid during the brewing process.

Scientists call it a biofilm or pellicle and it's made out of cellulose fibres produced by some bacteria in kombucha. The pellicle is not essential, it’s a byproduct of fermentation to which other bacteria and yeasts of the community adhere. If you want to buy a kombucha starter kit, you should receive the pellicle, packaged with live kombucha liquid.

However, the most important trick to making this beverage is to have a good batch of live, raw kombucha. Because it’s already brimming with all the microscopic bacteria and yeasts needed.
Bacteria are feisty, they have mechanisms to prevent pathogens from taking over their home.

All they want is more sweet tea and they will continue to form layers upon layers of this disk-like biomass. If you notice strands of brown floaties on it, that's a good thing. That’s a sign the yeasts are happy and active too. 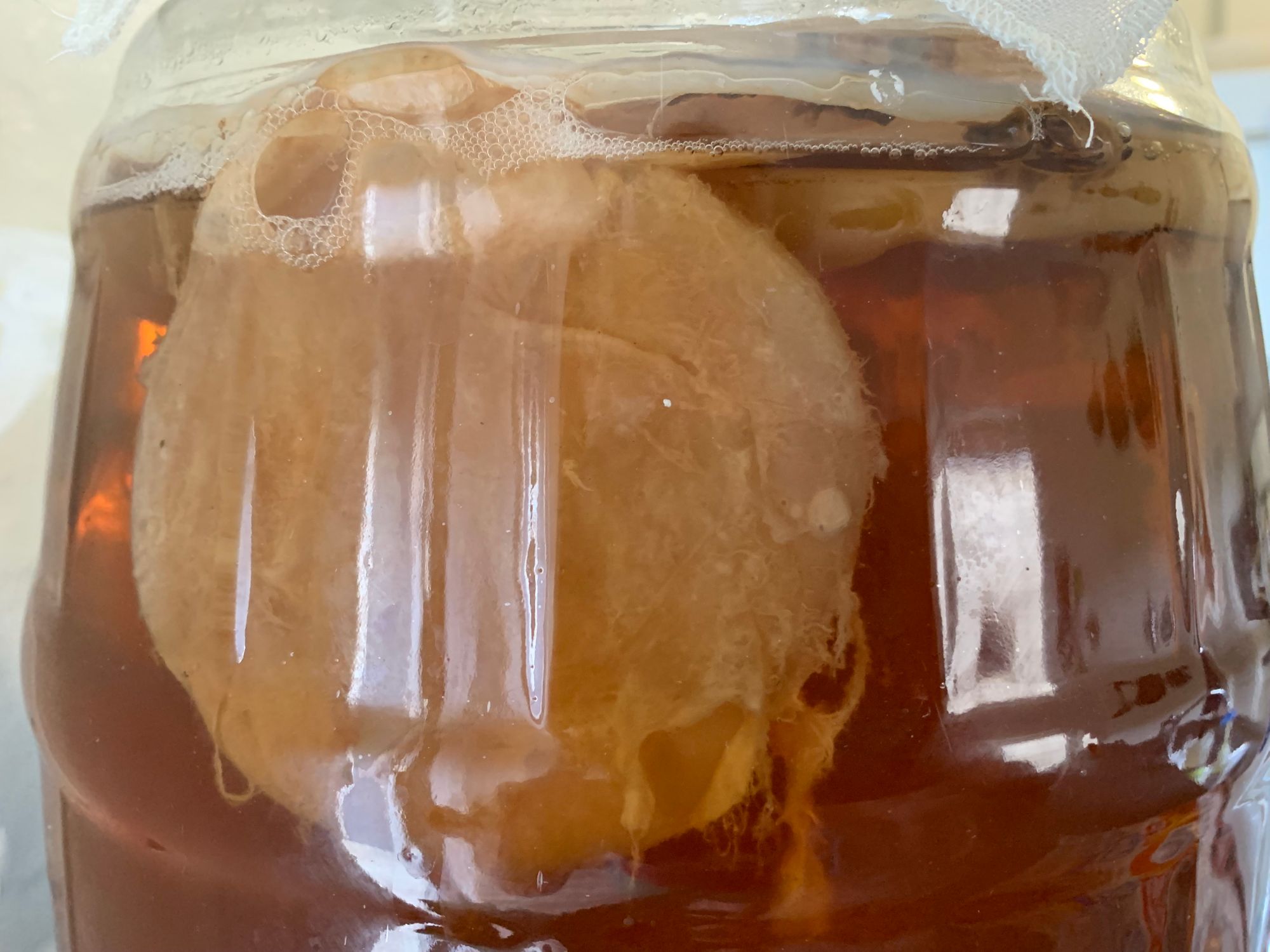 This is my SCOBY in all its glory, with yeasty strands and a beige colour scheme

Traditionally, human cultures can be distinguished by their aversion to other cultures’ fermented foods. And there’s no better way to overcome your initial aversion to a funky-looking kombucha pellicle than to get stuck in.

So get your hands wet and touch it. It doesn’t bite.

Western science has only recently regained interest in traditional probiotics that humankind has been consuming since the dawn of time. But no batch of kombucha is identical, so the nutrient profile is variable and this is bothersome when you're a scientist doing research.

Studies have been conducted on animals, but there is growing demand for clinical trials to be performed on humans to assess the health claims. But even without studies on the overall effects of kombucha, there's some interesting findings from research into kombucha's nutrient content. 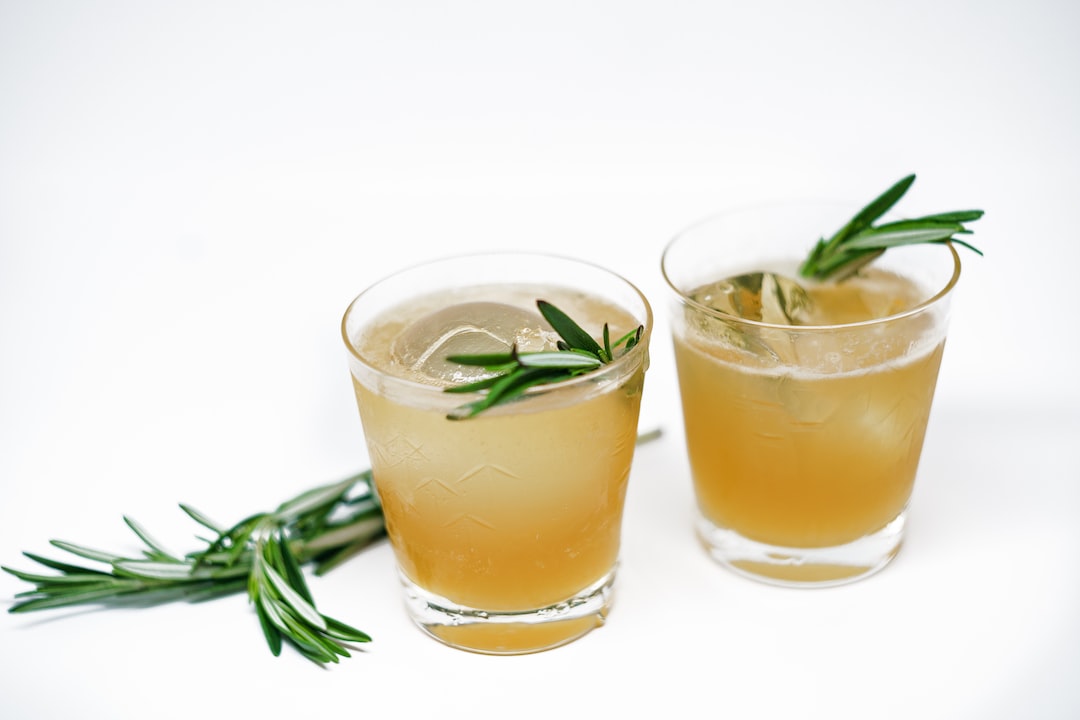 Kombucha tea is a fermented product. Like milk kefir, sourdough, sauerkraut, kimchi and other fermented foods, it has several benefits. The live culture of bacteria and yeasts feed off the tea and sugar mixture, creating a rich and diverse palate of nutrients that are considered beneficial for humans.

First off, you don’t need to worry about the sugar - because it is mostly consumed by the yeasts and bacteria who turn it into things like water-soluble vitamins B1, B2, B6, B12, C.

Kombucha also has acetic acid that prevents pathogenic organisms from taking over the brew. In addition to that, the SCOBY also produces compounds that nourish the other members of the community. Ergo, symbiotic.

Personally, I like to think of it as microscopic farming.

The fermentation process also enhances the mineral content of this beverage, and the body requires many different minerals in small amounts to fulfill its physiological requirements.

Polyphenols, the most abundant source of antioxidants present in food, are also found at higher levels thanks to the fermentation process. They are important plant chemicals for our health because they reduce oxidative stress in the body’s cells.

In fact, research shows that polyphenols help prevent diseases in which oxidative stress plays a role, like cancer, cardiovascular disease and neurodegenerative diseases. An additional bonus is that polyphenols nourish a probiotic microbe called bifidobacterium in the gut microbiome. 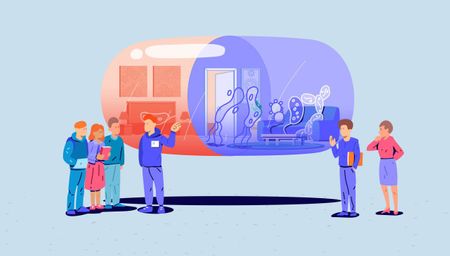 What are probiotics and do they do?

Kombucha also contains something called Glucuronic acid (GlcUA), a compound that is essential to many of the body’s processes, including liver detoxification. It also increases the bioavailability of polyphenols - that’s just a fancy way of saying it makes polyphenols more accessible to the body.

It’s really kind of beautiful. There’s actually even more going on in a jar of kombucha, but this is enough for your first dabble in the lost art of fermentation.

☝️DISCLAIMER☝️ Kombucha should be consumed in moderation, as part of a diverse and balanced diet. It is not recommended for women in the 3rd trimester of pregnancy.

Fermented foods are not too picky, and given you abide by a few basic rules, like clean utensils and keeping it at the right temperature - then you can’t really go too far wrong. Just watch out for your tap water. If it’s laden with purifying chemicals, just use a water filter to be on the safe side. After all, you don’t want to sanitise your SCOBY, do you?

You don’t need a lot, but you will need some things. Fortunately, fermentation is a frugal habit, so it’s a one-time investment. And, like my Irish ancestors, I like to make gut-friendly food on a budget - so get ready to save £15 on a glass jar with a little visit to the local Polish food shop.


How to make kombucha

Fermentation is a combination of art and science that can teach any type A personality to let go of perfection as a standard. And that’s because there are too many parameters to fully control every tiny detail.

Just remember that bacteria are feisty, they have mechanisms to prevent pathogens from taking over their home. So take a deep breath, trust your gut and try something new. After all, we’ve been doing this for millennia.

Now set yourself up for success, by reading the instructions in full. You’ll make sweet tea on the stove with some of the water. The rest, you’ll set aside to dilute afterwards. This creates the perfect temperature immediately for your kombucha SCOBY, instead of waiting around until a large batch of steaming tea cools.

All you have to do is make tea that your grandmother would scold you for: dark and tarry like a marsh pond, and strong enough to tame a highlander.

While the tea is stewing, measure out the room-temperature ingredients.

So you’ve got your supplies and you’re ready to go.

1. Wash your jar, and any tools in very hot soapy water. Or put it in the dishwasher for a cycle. This sterilises the environment so your kombucha doesn’t get invaded by opportunistic bacteria that might make you sick. It’s basic hygiene, like washing your hands after the toilet.

2. Identify a shady quiet spot in your kitchen with a relatively stable temperature (so not near the oven, stove top or kettle spout). It shouldn’t be in direct sunlight either. That’s where your kombucha will hang out and ferment.

3. Brew a hot batch of really strong tea. Sure, there’s an ideal - like 5g of tea leaves per litre of water. But if you’re working with tea bags, just make a nice, strong batch of tarry tea - too strong for you to drink. Remember, you’re going to dilute it with cool water soon.

4. Stir in the sugar with a wooden spoon until dissolved. You’ll know it’s not finished dissolving if you tap the spoon on the bottom of the pan and there's a crunching sound.

5. Pour your cool water in the sterilised jar, then add your hot tea to it. Test the temperature using your hand. Is it comfortable or does it burn? It it’s too hot, leave it to cool. However, if you followed my instructions you should be able to finish up asap. Add the SCOBY (liquid and pellicle) to the tea mixture.

6. Cover the jar mouth with muslin and secure with string or an elastic band. Place it in your pre-selected location for light and temperature stability.

☝️TIP☝️ If it’s too much like vinegar, start a fresh batch. You can keep the first batch in a bottle, it’s eventually ferment itself into actual edible vinegar for your salad dressing.

So there you have it, the basic introduction to making kombucha. This recipe doesn’t touch on the finer points like flavouring, second fermentation, bottle conditioning and so on.

As a modern human with a job, things to do and healthy homemade food to cook, I simply don’t have time for it. This recipe is quick and efficient. It works, it tastes delicious and it doesn’t require a PhD in astrophysics. So if you are like me, then it’s perfect for you!