Can fermented food and fermented products heal anything? We explain the facts for health and how fermentation works.

Fermentation is a traditional food preservation technique that provided humans with food before the invention of mod-cons like fridges and freezers. Because fermentation is only possible thanks to probiotic bacteria, scientists believe these foods have potential benefits for health.

Probiotics are live bacteria with proven benefits for the gut, metabolism, and possibly even mental health. Fermented foods create a neat delivery method to your gut where they can influence your health. Here, we look at the evidence on fermented foods for health and what foods to eat.

Humans have been fermenting since the dawn of time, and alcohol is a prime example of our obsession with the bacterial transformation of food.

The process of fermentation happens when bacteria (and yeasts) break down and transform a substance into something else. In terms of food, the activity of the microbes confers food and beverages a distinctive, texture, and flavour, as well as an enhanced nutritional profile.

Our love affair with fermented products (and booze) is ancient. For example, alcohol was a very early fermented food product. In fact, humans enjoyed it so much that some theories suggest our thirst for beer actually instigated the domestication and farming of grains.

A 2018 study suggests that alcohol brewing started 13,000 years ago and motivated the development of agriculture. Others hypothesise that a genetic mutation found in our last common ancestor allowed them to metabolise the alcohol in fermented fruits scavenged from the forest floor.

Whether you're a teetotaler or not, fermented foods are a staple part of the diet in many cultures. They are easy to produce and only require a handful of ingredients, so anyone can have a go at fermenting their own – that's probably why our ancestors adopted this technique.

☝️FACT☝️Pasteurised fermented foods no longer contain live probiotic microbes, but they still have the nutrients produced during fermentation.

Why is fermented food good for you? Well, it contains beneficial bacterial communities that prevent spoilage and boost nutritional value.

The benefits of fermentation hinge upon microbial activities that preserve food, meaning less spoilage and a longer shelf-life, that also give food a unique and distinctive taste. This process is why the nutritional value of fermented foods and their digestibility are better.

Why are fermented foods good for you?

That's because bacteria break down indigestible ingredients like fibres and proteins. They also use the naturally-occurring sugars as a source of fuel. The result of these activities is enhanced availability of nutrients including vitamins and minerals. 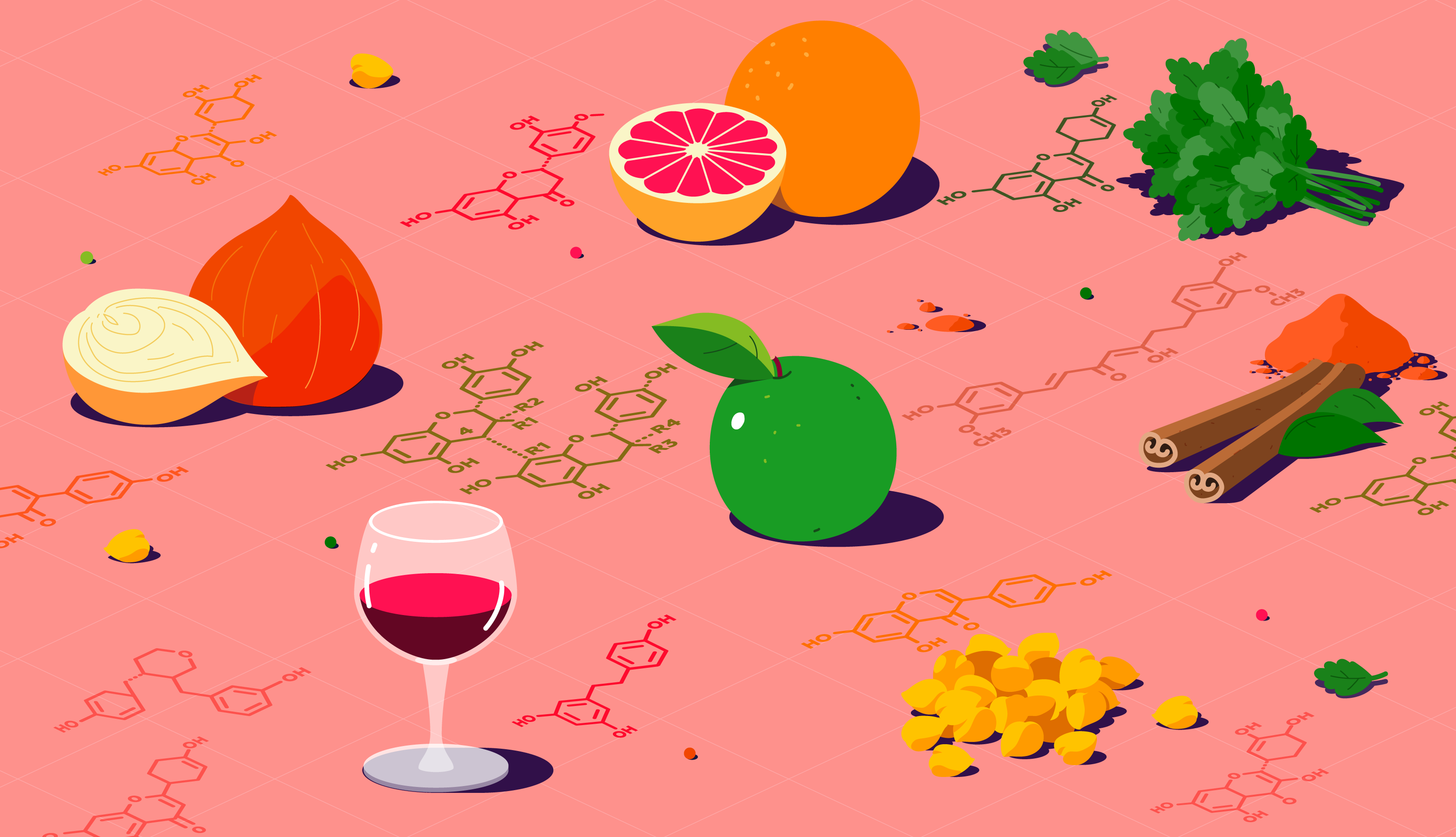 The ultimate guide to polyphenols

Microbes can also metabolise polyphenols, natural antioxidants in plants, which increases the level of these important substances. For example, black and green tea contain health-promoting polyphenols - when they're made into kombucha, the polyphenol content is boosted too.

Are there fermented vegetables benefits?

Practically any vegetable can be fermented, from asparagus tips to carrots and even potatoes - an ancient Slavic food that is particularly pungent. Even though they are often called "pickled vegetables", when transformed with bacteria, they are actually lactofermented (with lactic acid bacteria).

Lactofermented vegetables are better than pickled vegetables, which are just preserved in vinegar, because microbes produce vitamins and boost the availability of minerals by metabolising the natural sugars in the plants.

Fermented vegetables health benefits are not limited to just nutrients, they also contain dietary fiber which is good for the gut. Prebiotic dietary fibers nourish beneficial bacteria in the microbiome while other fibers stay intact and help with the frequency of bowel movements.

Lactic acid bacteria are the most common and well-known fermentation bacteria. They can live in salty environments that are uninhabitable for opportunistic (and potentially harmful bacteria), which is why salt brines are common in fermentation.

These bacteria also produce nutrients and acetic acid (the basis of vinegar) that transform the pH of the food, making it acidic (which also acts as a deterrent to bad microbes). That's why fermented foods tend to be sour.

Bifidobacteria are also recognised probiotic bacteria that help ferment foods. They are particularly prominent in fermented dairy, like yoghurt, which often contains Streptococcus thermophilus - but this type of streptococcus is not dangerous for your health.

The probiotic bacteria found in fermented foods can also be found in the gut where they share health benefits with you, the host. These live microorganisms do some magical things for your gut, keeping the environment balanced by producing health-promoting metabolites.

There's lots of research into the functions of probiotics in the human gut microbiome where they perform a range of beneficial functions. However, probiotic bacteria that you eat don't necessarily settle down in the gut. But even then, they still share some magic with you: 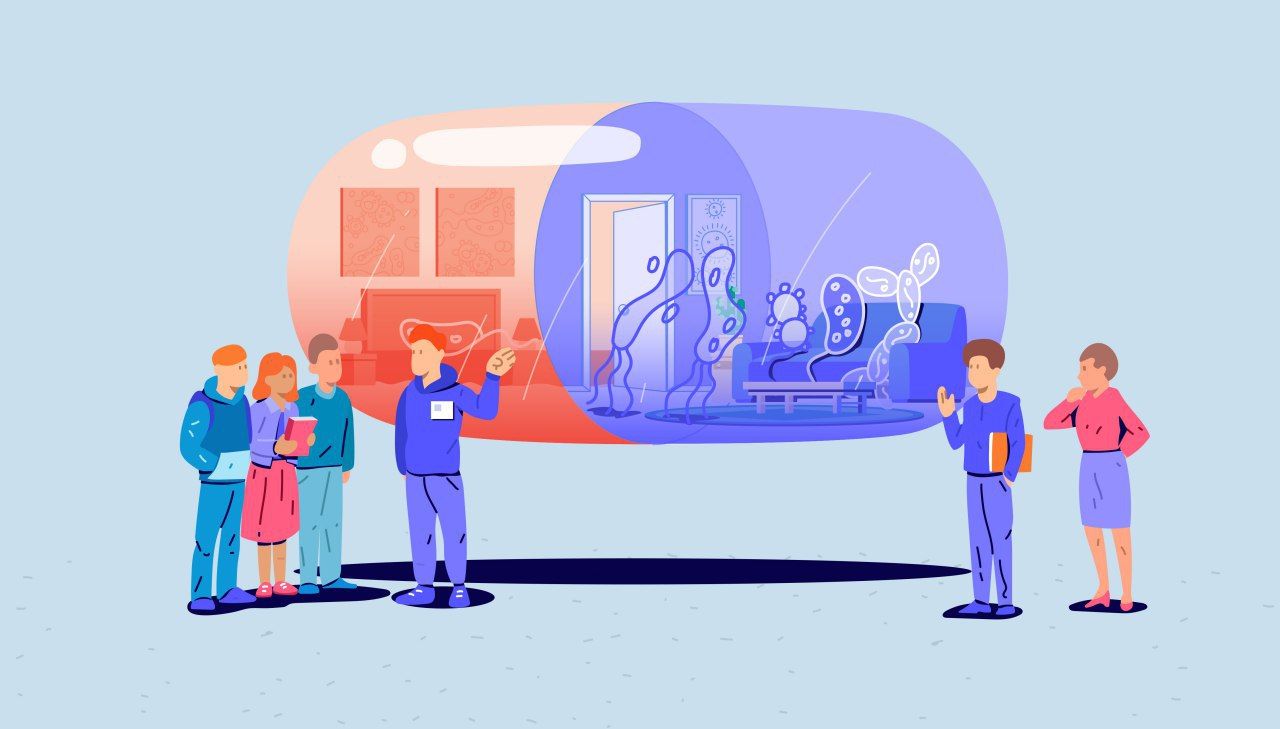 What are probiotics and what can they do for you?

Fermented foods are a neat way to deliver health-promoting bacteria to the gut. Even when the health benefits of fermented foods have a transient effect, regular consumption can have a positive effect on the diversity and composition of the gut microbiota.

Diversity is key. If it’s low and you have too much of one type of bacteria and not enough of another, you’re at risk of an unbalanced gut microbiome, also known as dysbiosis. Consuming beneficial microbes helps maintain the correct acidity so other good microbes can prosper, but opportunists don't.

☝️TIP☝️ Discover your microbiome levels of beneficial bacteria and probiotics with the Atlas Microbiome Test.

Your gut lining is a barrier between your gut and the rest of your body. It’s selective, allowing good things like nutrients into the body while preventing bad things, like toxins and pathogens, from entering your bloodstream where they could make you ill. 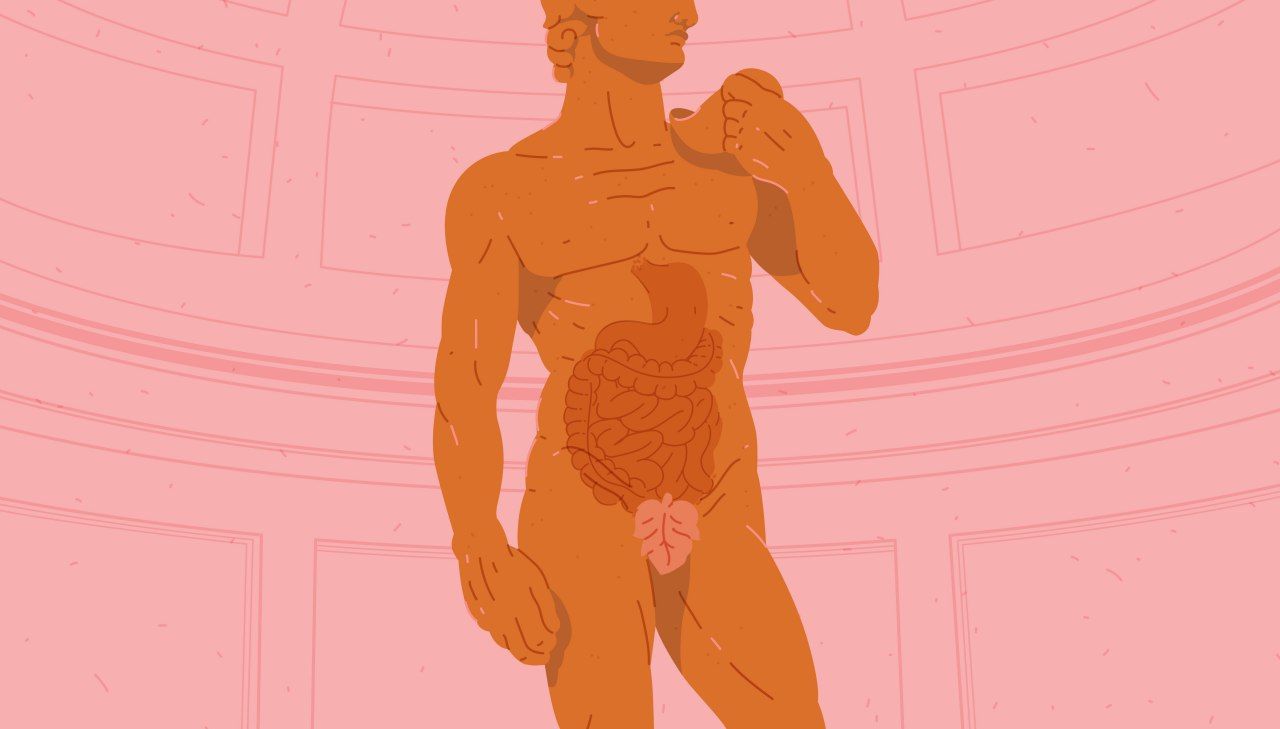 Probiotic bacteria can improve the gut barrier function and strengthen intestinal permeability. That’s because they produce a short-chain fatty acid, acetate, that is used by other beneficial bacteria to make butyrate - another SCFA that fuels the cells of the gut lining, preventing "leaky gut".

Some adults have lactose intolerance, meaning their body produces much less lactase, the enzyme that breaks down the lactose (a sugar) in dairy products, resulting in digestive symptoms like bloating, flatulence, pain, and diarrhoea.

Furthermore, L. acidophilus, a microbe in probiotic yoghurts, aids the digestion of lactose because it actually produces lactase, the essential enzyme needed to break down milk sugars.

Some research shows that certain lactic acid bacteria, like L. helveticus, can reduce blood pressure in people who have a mildly high blood pressure reading. That’s because it breaks down complex proteins in foods like milk, releasing compounds known to lower blood pressure.

That’s not all, L. acidophilus has been shown to lower blood cholesterol levels, which are also associated with heart health. Collectively, these benefits could help prevent heart disease and improve the overall health.

Milk kefir is among one of the best researched fermented foods and could help boost the immune system function. It has antimicrobial properties, and studies indicate that it could prevent some gastrointestinal infections caused by bacteria, including salmonella.

Who knew that fermented foods might benefit your brain health? Well, there is promising research going on that appears to show that these sour foods and beverages could improve the function of the brain and your cognition. 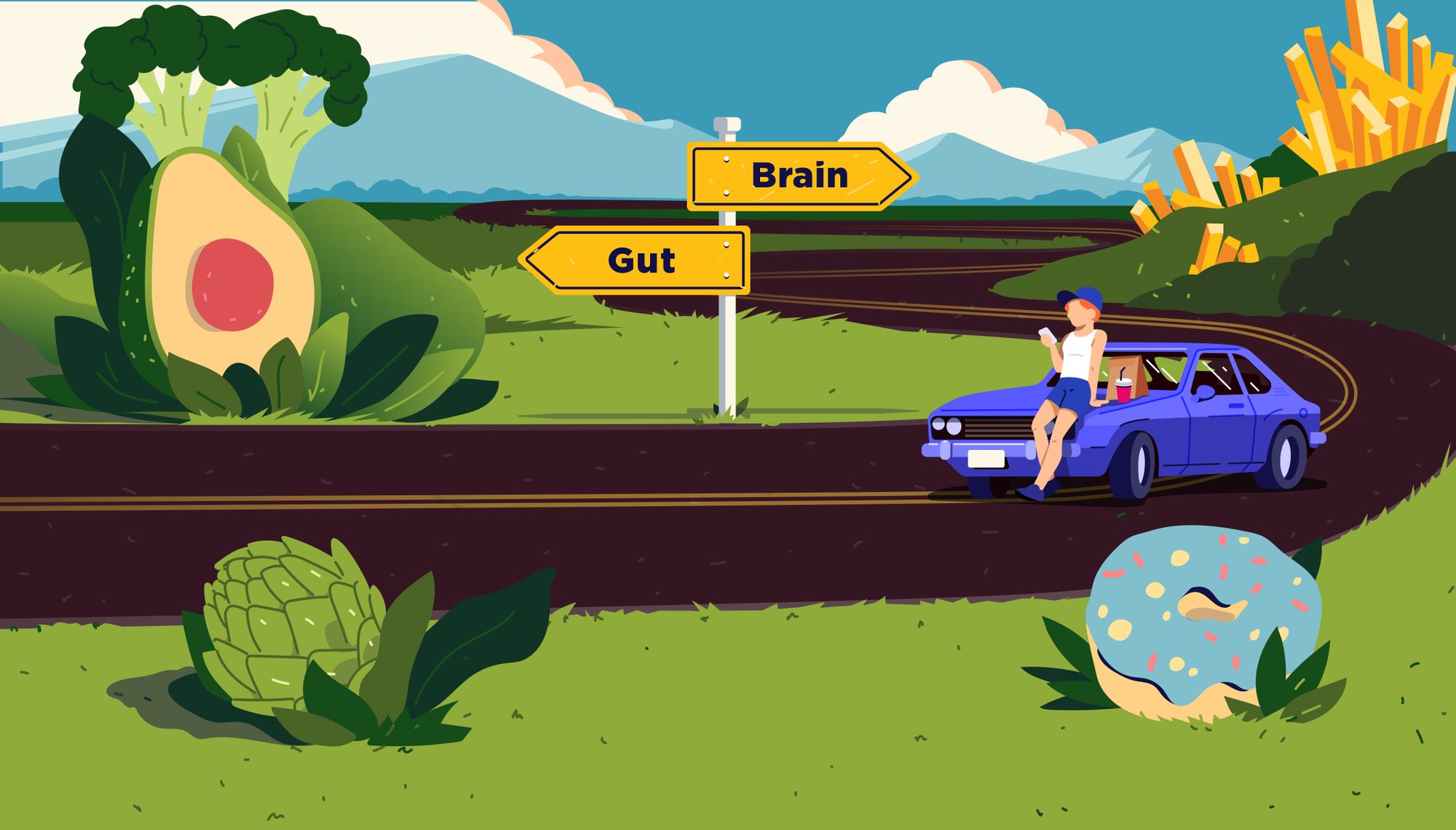 Your gut-brain-axis influences your disease risk and mental health

The probiotics in food may have a positive effect on your gut microbiota, which in turn has benefits for your brain. Your brain and gut communicate constantly via the nervous system, and bacteria produce metabolites that may strengthen stress resilience and tackle anxiety and depression.

Limited research and side effects

Research surrounding the benefits of fermented foods is limited because microbes have been reviled since the discovery of infectious bacteria by Pasteur. Back then, humans didn't have the tools we have now though, like DNA sequencing, that allows scientists to finally investigate the benefits.

Even though research into probiotics is booming, scientists only recently became interested in the possible benefits of fermented foods for health. After all, they're cheap (compared to medicine) and populations who consume a variety of them tend to be healthier.

So while there is a link between fermented foods and health via the beneficial action of microbes, further research is needed to elucidate what features of our health can benefit from fermented food and how these mechanisms actually work.

Not all fermented foods are probiotic

Probiotic bacteria are present in many fermented foods. They transform the complex carbohydrates, proteins, and fats which changes the bioactivity and nutrition of the food in a way that benefits your health.

However, not all fermented foods are probiotic. For example, high cooking temperatures or pasteurisation kill the microorganisms, and beverages like beer have the culture removed before they are sold to you. But, foods like yoghurt can be both fermented and a probiotic.

As discussed, the fermentation process typically requires salt - in large amounts - because it makes the environment inhabitable for bad bacteria and cleanses any that could be on the vegetables, surfaces or in the water. However, high salt intake is associated with bloating and should be limited for people with heart problems.

Also, some people may find that eating large amounts of fermented foods can cause side effects like gas and bloating, especially if you don't introduce them gently into your diet. In essence, fermented foods that are good for you should be consumed in moderation.

Recently, researchers also pinpointed a possible association between consuming fermented food and gastric cancer. A 2012 review shows that intake of pickled veg and foods may increase the risk of gastric cancer in Koreans and Chinese nationals.

So, are fermented foods good for you?

The process of fermentation has been around for thousands of years and is still a staple in many cultures across the world. The research into the benefits of probiotic fermented food is growing, particularly as its popularity increases.

The health benefits of fermented foods are possible because the bacteria make them safe and enhance their nutritional profile. Lactic acid bacteria and Bifidobacteria make the environment unwelcoming for opportunistic pathogens while also making beneficial metabolites.

So why eat fermented foods? Although there is still lots to be learned about the benefits of fermentation, fermented foods can be incorporated into a balanced, healthy diet because the probiotics they contain are known to have a variety of health benefits, particularly for the gut.